Q1. Answer Any four of the following.                                           (20 marks)
A. Answer the following.      (5)
Ans. A balance sheet is a statement showing the financial position of the business in the form of its assets and liabilities on a particular date.
Ans. A co – venture is a temporary partner of joint – venture business only.
Ans. Super profit is the profit earned over and above the normal return on the capital employed by the business firm.
Ans. Endorsement of a bill is the holder’s signing on its back with the intention of transferring its title or ownership to another.
Ans. Goodwill is the monetary value of the reputation of a firm as measured in terms of its expected future profits.
B. Write word/term/phrase which can substitute each of the followings:         (5)
Ans. Goodwill.
Ans. Prepaid Expenses.
Ans. Retirement of Bill of Exchange.
Ans. Drawee.
Ans. Respective Assets Account.
C. Match the pairs.    (5)
D. Select the most appropriate alternative from those given below:     (5)
E. State True / False with reasons. (Any Two)        (5)
Ans. The given statement is true because of the following reasons.
i.                    Under fixed capital method each and every transactions of partners are transferred to their current account and not in their capital account.
ii.                  It becomes compulsory for the partners to maintain two accounts for their transactions. Once is capital account to record additional capital introduced and current account as well.
Ans. The above statement is false because of the following reasons.
i.                    Under fixed instalment method depreciation is charged on the original value of the assets and the amount of depreciation will remain constant for each year.
ii.                  Under Diminishing balance method only the depreciation on fixed asset is charged on the written down value of fixed asset every year.
Ans. The above statement is false because of the following reasons.
i.                    Profit and loss appropriation account is another profit and loss account prepared especially to record the transactions pertaining to the partners.
ii.                  Thus Interest on Partner’s drawings is credited to the profit and loss account (or) profit and loss appropriation account and it will be debited to Partners capital account in the case of fluctuating capital method and to Partners  current account in the case of fixed capital method.
F. Prepare a bill of exchange from the following information:
Drawer: Vilas Patil, 21. M.G. Road, Pune
Drawee: Vikas Pawar, 31. S.V. Road, Nasik.
Payee: Viraj Potade, 41, A.B. Road, Sholapur,
Period: 2 months
Amount: Rs. 7,500/-
Date of Bill: 1st January, 2007.
Date of acceptance: 3rd January, 2007.
ANS. 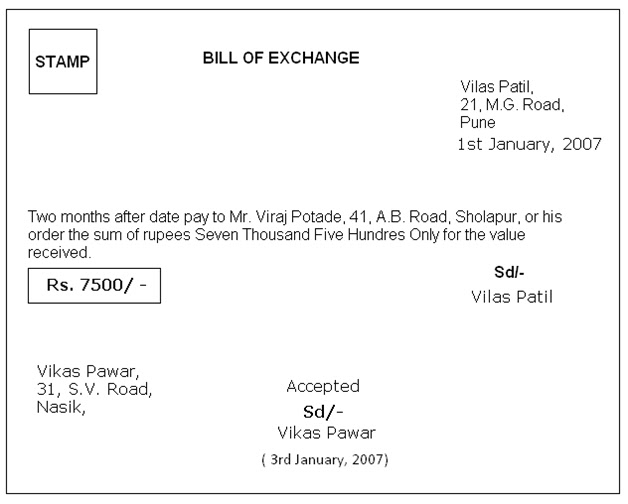 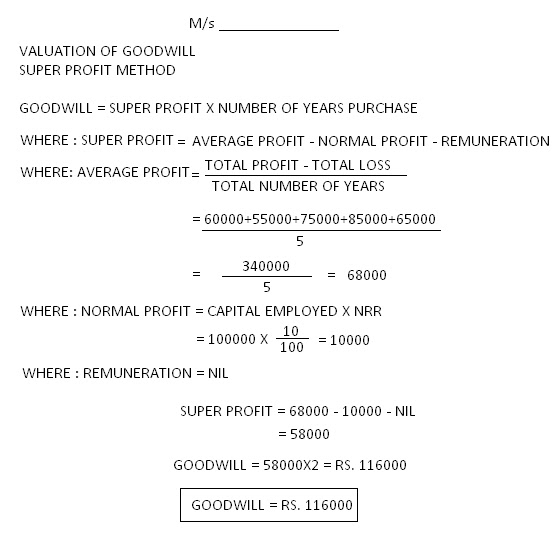 Q2. (B) Importance of computer in accounting.
Ans.
The role of computer in accounting is explained as follows.
1.       For various reasons, every business organization is required to prepare and maintain various books of account. The computer is used by many business organizations to carry out accounting operations at a greater speed and accuracy.
2.      The computer is useful for classifying, processing, analyzing, tabulating, recording and interpreting the accounting data for various purposes.
3.      It is useful for improving the financial system of the organization.
4.      With the help of the computer, accountants can easily, accurately and speedily prepare the different source documents like voucher, invoice, quotation, receipt, etc.
5.      The computer is useful for recording accounting entries in the journal and posting such entries in the ledger. It is also used to prepare trial balance, final account, accounting statements like Balance sheet, etc.
Q3. Anil sold goods to Ravindra for Rs. 6000. Ravindra accepted Anil’s bill for Rs. 6000 payable after 3 months. After a month, Anil discounted the bill with his bank at 10% p.a. On the due date, Ravindra dishonoured his acceptance. Ravindra paid Rs. 3000 to Anil and accepted a fresh bill for 3 months for the balance including interest @ 8% p.a. Anil sent the bill to bank for collection. On due date, Ravindra honoured the bill. Pass the journal entries in the books of Anil. (October 2002 board exam questions).
Ans.
Journal of Anil
OR
Q3. Journalize the following transactions in the books of Motilal:
a.        Bhavna informed Motila that Jyoti’s acceptance for Rs. 3600 endorsed to Bhavna has been dishonoured and noting charges have been Rs. 150.
b.       Anil renews his acceptance to Motilal for Rs. 3400 by paying Rs. 900 in cash and accepting a new bill for the balance plus interest at 8% p.a. for 3 months.
c.        Prabhakar retired his acceptance to Motilal for Rs. 4000 by paying Rs. 3850 in cash.
d.       Bank informed Motilal that Arun’s acceptance of Rs. 7000 which was discounted with bank has been dishonoured with noting charges Rs. 100. (March 2008 board exam questions)
Ans.

Chapter 2: Accounts of ‘Not for Profit’ Concerns